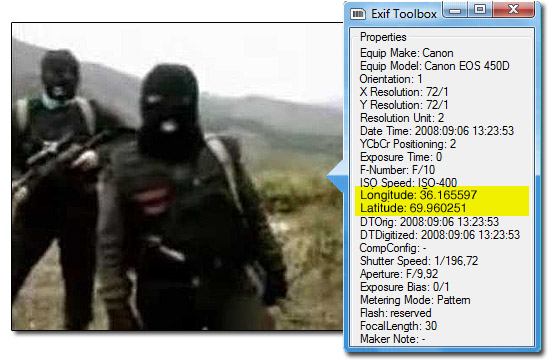 We all know that criminals aren’t always that bright. Sometimes they like to record themselves or take memento photos during the commission of a crime to glorify their achievement. What they are unaware of is that many modern digital cameras and smartphones also record metadata such as information about their camera, the camera settings, location, date and time the image was captured. This metadata can obviously be invaluable to investigators if they are able to track down criminals by identifying when and where a photo was taken, and which device captured the moment.

What is Exif Metadata?

Exif stands for Exchangeable image file format. Exif metadata is additional information that is stored with the digital file which is invisible to the viewer while looking at the photo, but it can be read from the using metadata readers. Exif was created by the Japan Electronic Industries Development Association (JEIDA) and it specifies the formats for images, sounds and ancillary tags used by digital cameras, smartphones. Metadata can be found in many types of files including: JPEG, TIFF, MOV, WAV and more.

What type of information can be stored in Exif Metadata?

The metadata embedded within each photo can cover a broad spectrum of information. Some of the data stored with each photo taken is:

Date and Time – Most digital cameras will record the current date and time.
Physical Location – GPS enabled cameras, especially smartphones can geotag photos with exact GPS co-ordinates of where the photo was taken.
Dimensions – Image resolution, compression, width and height (measured in pixels).
Variable Camera Settings – including the shutter speed, exposure time, aperture size, focal length, metering mode, ISO speed, and camera orientation (rotation) at the time the photo was taken and whether or not a flash was used.
Fixed Camera Information – such as the make, model, serial number and if a lens was used it may also store information about the lens as well.
Thumbnail – a smaller version of the original image is stored for quick viewing on the camera’s LCD screen, file managers and photo manipulation software.

Additional information that can be stored with the photo after it has been taken include:

Description – Text describing what the photo was about.
Keywords – A photo could be tagged with keywords for searching later.
Copyright Information – Photographers and Stock Photography websites want to protect their images so they add copyright information to the image.
Image Manipulation Data – When an image is changed from its original state using image manipulation software, the software manufacturer may insert their own meta data identifying what software made the changes and who made the changes.

How can Exif metadata help track down and convict criminals?

If a criminal has taken a photo or video during or after a crime, any Geodata that was recorded can help forensic investigators pinpoint the exact location a photo was taken. It is actually one of the most useful pieces of information stored within the metadata of a digital photo. If a kidnapper were to send police a digital photo of their captive as proof of life or record a ransom video with demands that were recorded with a GPS enabled phone or camera, the police would be able to easily determine the exact GPS co-ordinates to go to make the arrest.

If a camera’s serial number was stored in the metadata, a stolen camera could be tracked online when photos taken from the camera were uploaded to the internet. A series of illegal photographs could be tracked back to an individual camera and ultimately the camera owner. If a camera was registered through the manufacturer (usually for warranty purposes) investigators may be able to obtain the owners information from the manufacturer via the make, model and serial number they gathered from the photo metadata.